Everything is dependently arising - 147 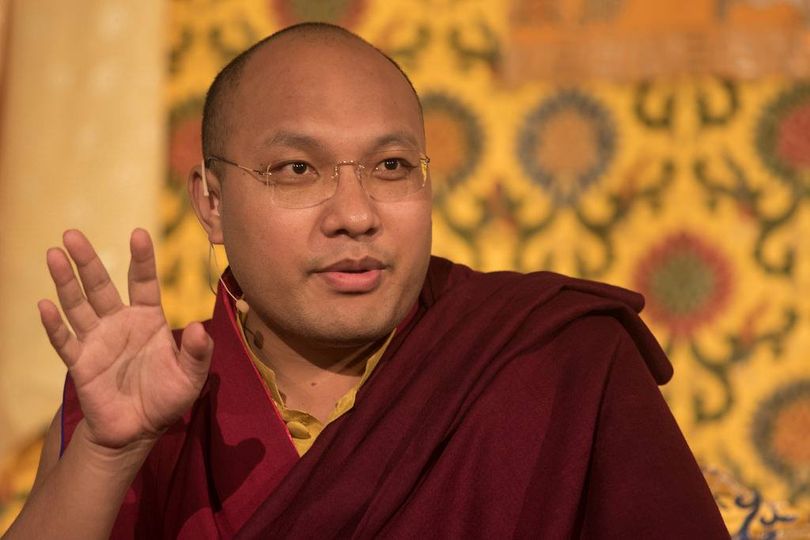 Everything is dependently arising - 17th Karmapa - 147

When we talk about 𝗲𝗺𝗽𝘁𝗶𝗻𝗲𝘀𝘀 [T2], is has to be based on an understanding of the 𝗿𝗲𝗹𝗮𝘁𝗶𝘃𝗶𝘁𝘆 of all things [T1].

[Example:] Looking at 'the reflection of the moon on water', we can see that there is nothing there [T2]. Even that is dependently co-arisen  [T1], dependent on the existence of the moon and the water, on the ability of water to reflect. (𝘢𝘯𝘥 𝘤𝘰-𝘥𝘦𝘱𝘦𝘯𝘥𝘦𝘯𝘵 𝘸𝘪𝘵𝘩 𝘵𝘩𝘦 𝘴𝘶𝘣𝘫𝘦𝘤𝘵 / 𝘰𝘣𝘴𝘦𝘳𝘷𝘦𝘳, 𝘩𝘪𝘴 𝘱𝘰𝘴𝘪𝘵𝘪𝘰𝘯 & 𝘴𝘦𝘯𝘴𝘦 𝘰𝘳𝘨𝘢𝘯𝘴 ...)

All of these things must come together [T1] to enable us to see the reflection of the moon on the water. That is emptiness [T2].

Everything is 𝗱𝗲𝗽𝗲𝗻𝗱𝗲𝗻𝘁𝗹𝘆 𝗮𝗿𝗶𝘀𝗶𝗻𝗴 [T1]; nothing exists on its own.

Via: Devotees of the 17th Gyalwang Karmapa Ogyen Trinley Dorje

Comment: So dependently arisen appearances & relative functionalities [T1] and emptiness [T2] are on an equal footing. One is not more important than the other. They are interdependent; one cannot exist without the other; one implies the other. So we should not grasp ‘emptiness’ as being good, and ‘appearances’ --  physical, conceptual, mental -- as being bad. Everything is pure manifestations of the Ground / Buddha-nature / U2T.

-- Appearing but empty, empty but still appearing and relatively functional.

not different / separate / multiple / dual, not identical / united / one / non-dual, not both together, not neither;

not this, not non-this, not both together, not neither; etc. [tetralemma].

-- 𝗘𝘃𝗲𝗿𝘆𝘁𝗵𝗶𝗻𝗴 is free from all extremes & middle,

free from all limitations,

free from all conditioning / karma.

That is what we have to understand and then directly perceive / realise / experience. That is the liberating factor that transmutes samsara into nirvana here & now.

Note: This is just a finger pointing at the moon, not the moon itself.

All beings consist of causes and effects [T1],

In which there is no ‘sentient being’ at all [T2].

From phenomena which are exclusively empty [T2],

There arise [T1] only empty phenomena.

Like a recitation, a candle, a mirror, a seal,

A magnifying glass, a seed, sourness, or a sound,

So also with the continuation of the aggregates —

The wise should know they are not transferred.

The Heart of Dependent Origination, verse 4 & 5

The four great logical arguments of the Middle Way are:

# 4. Analysis of All: The Logical Argument of Great Interdependence

All phenomena do not come into being through their own inherent identity, but as a result of the coming together of causes and conditions [T1], and when there are no conditions they do not arise. Even at the time when they appear, they appear whilst lacking any inherent existence [T2], since they are like reflections, brought about by causes and conditions. Free from any conceptual elaborations such as being permanent or non-existent, going or coming, arising or ceasing or being one or many, they appear whilst lacking true reality.

When evaluating in this way, using reasoning investigating the ultimate in accordance with the actual nature of things, they are found to be mere unfailing dependent arising [T1]. Otherwise, if they were truly established in any way, such as arising according to the four extremes or four alternatives, or being existent or non-existent, or permanent or impermanent etc., then that would be inappropriate as an explanation for the conventional, and would result in a deprecation of all conventions.

This king of reasonings, the Great Interdependence, includes all the other types of ultimate logic, such as the Diamond Splinter and so on, because they are all concerned with the seemingly real, unexamined appearances of dependent origination. When analyzed, no causes, effects or essential identities whatsoever can be established. The extensive variations of this logic that investigates the meaning of dependent origination are to be found in The Root Verses of the Middle Way and elsewhere.
.
https://www.lotsawahouse.org/tibetan-masters/mipham/four-great-logical-arguments

[The two truths -- relatively functional dependently arisen appearances and emptiness of inherent existence --  are not contradictory, not in real opposition. Instead one supports the other; one implies the other; they are inseparable. They are non-dual: not different / two, not identical / one, not both together, not neither.]

Emptiness (T2) is not the absence of phenomena (T1),

and phenomena (T1) are not the absence of emptiness (T2).

(i.e. The unborn, unchanging, unceasing nature of phenomena: the inconceivable Union of the Two Truths about everything: Union of conventionally dependently co-arisen relatively functional ever-changing impermanent 𝗮𝗽𝗽𝗲𝗮𝗿𝗮𝗻𝗰𝗲𝘀 <==> and 𝗲𝗺𝗽𝘁𝗶𝗻𝗲𝘀𝘀 of inherent existence (T2). One truth implies the other (<==>).)

Having just a glimmer of understanding that things are not as they appear is a big step toward seeing the true nature of things.

A Brief Presentation of View, Meditation and Action

[Everything is empty of inherent existence ... because continually changing ... dependent on changing causes & conditions.]

“Our belief that the mind is a real entity is a conclusion based on insufficient investigation.
We believe a river we see today to be the same river we saw yesterday,
but in reality a river never stays the same even for a second
– the water that made up yesterday’s river will surely be part of the ocean by now.

The same is true for the countless thoughts that run through our ‘mind’ from morning to evening.
Our mind-stream is just a succession of instantaneous thoughts [T1];
there is no separate entity that you can point out as being a mind [T2]. (subject / self)”

- The Heart Treasure of the Enlightened Ones – The Path of the Tantras – Collected Works, Vol II pp 315 – Shambhala

.
.
.
Comments: The same for everything (physical, conceptual, mental).

Still, conventionally, for things that remain almost the same for long periods of time, our mind imputes them a stable existence. And we become disturbed when they really change, decay, and then cease.

Also, the most important cause / condition for the appearance of things is our own conditioned mind. We imagine those invariant things in dependence of our conditioning / karma; give them names; and then forget that we have imagined / created them; and think they exist out there independently of our mind(s), and that we have 'discovered' them.

The whole universe is like a sea of conditionality with nothing really existing in it. Just this inconceivable One conscious energy.

Nagarjuna said that for a system

where 𝗲𝗺𝗽𝘁𝗶𝗻𝗲𝘀𝘀 is possible, (T2 - emptiness of inherent existence)

==> it is also possible to have 𝗳𝘂𝗻𝗰𝘁𝗶𝗼𝗻𝗮𝗹𝗶𝘁𝘆 (i.e. T1:  conventional dependency on cause & conditions, and conventional capacity to produce effects),

(i.e. One aspect implies the other (<==>). ex. everything comes from nothing / emptiness; emptiness makes everything possible; everything is empty because dependently arisen / interdependent.)

(i.e. Interdependence / Union of the Two Truths about all dharmas:

Everything is like an inconceivable Inseparability / Interdependence / Harmony / Union of 1) being conventionally 𝗱𝗲𝗽𝗲𝗻𝗱𝗲𝗻𝘁𝗹𝘆 𝗰𝗼-𝗮𝗿𝗶𝘀𝗲𝗻 𝗿𝗲𝗹𝗮𝘁𝗶𝘃𝗲𝗹𝘆 𝗳𝘂𝗻𝗰𝘁𝗶𝗼𝗻𝗮𝗹 ever-changing impermanent appearances [T1], merely labelled / imputed / conceptualised by the mind in dependence of its past / conditioning / karma

So when we talk about nature, [some say:] 'the ultimate nature is emptiness'.

What is meant by emptiness, or shunyata?

It is not the emptiness of existence (i.e. it is not mere-emptiness, not complete non-existence, not just absence)

but rather the emptiness of true or independent existence [T2],

which means that things exist by dependence upon other factors [T1].

(i.e. Meaning the ultimate nature is not just mere-emptiness [T2], but the Union of the Two Truths [U2T]: the Union of presence and absence; the Union of dependent origination / functionality and emptiness of inherent existence.

Also dependent origination / functionality and emptiness are themselves also empty because co-dependent, merely labelled / imputed by the mind.)

(ex. In the case of the mind: its true nature is the Union of its basic functionality / awareness and its emptiness / purity, which is called 'empty-awareness'. Its capacity to experience is always present / vajra, but if you try to find this awareness / functionality, you cannot grasp it.)

The two truths are always in Union in that way. [U2T - Union of the Two Truths]

[It is simple. REALITY is the Union of the Two Truths: a Middle Way free from the extremes of inherent existence & complete non-existence.]

The doctrines of emptiness [T2 - not inherent existence] and selflessness do not imply the non-existence of things. Things do exist [T1 - not complete non-existence].

When we say that all phenomena are void of self-existence [T2 - emptiness], it does not mean that we are advocating non-existence [nihilism / nothingness], that we are repudiating that things exist [rejecting / escaping the world].

Then what is it we are negating? We are negating, or denying, that anything exists from its own side without depending on other things.

from the book "Answers: Discussions With Western Buddhists"

Comments: THIS IS UNION OF THE TWO TRUTH [U2T] : everything is empty of inherent existence [T2], like illusions, not really existing <==> exactly because everything is conventionally dependently co-arisen / interdependent relatively functional ever-changing impermanent appearances [T1] -- physical, conceptual, mental; subject, relation/action, object --, merely labelled / imputed by the mind in dependence of its past / conditioning / karma -- individual, collective, cosmic --, not completely non-existent. One aspect / truth implying the other (<==>).)

The two tuths themselves -- dependent origination / causality & emptiness -- are themselves both empty of inherent existence [T2], not really existent <==> exactly because they are inseparable / interdependent / co-dependent [T1], merely labelled / imputed by the mind. And vice versa (<==>).

In other words: if appearances are not real, then their negation / emptiness is also not real. Without the belief in the inherent existence of things, then there is no more need for its antidote / emptiness. So 'emptiness' is not really some kind of Ultimate Truth or Reality. It is the ultimate truth only in name. The Ultimate Reality is inconceivable, beyond all dualities like empty vs. non-empty.

And this leaves nothing to grasp at all. This is transcending all views, all extremes & middle, all dualistic conceptual proliferations.

Emptiness does not destroy discursive thought

[The two truths are not contradictory; one implies the other)

The great demon of ignorant and discursive thought causes one to sink in the ocean of samsara.

But when freed from this discursive thought, there is the indescribable state, beyond conceptual mind.

There is not even the words of 'samsara' and 'nirvana'.

The total calming down of discursive thought

Is the suchness of Dharmadhatu.

Not made complex by complex statements, this unfabricated single bindu is emptiness, the natural state of mind.

So it was said by the Sugata.

The essence of whatever may appear, when simply left to itself,

Is the unfabricated and uncorrupted view, the Dharmakaya, emptiness mother.

All discursive thought is emptiness,

And the seer of the emptiness is discursive thought.

(i.e. Union of the Two Truths)

The fourfold emptiness of the mind itself

Is the ultimate of everything.

Profound and tranquil, free from complexity, uncompounded luminous clarity, beyond the mind of conceptual ideas:

This is the depth of the mind of the Victorious Ones.

Excerpts from "A Letter in Praise of Emptiness" From Nyoshul Khenpo Rinpoche to his Mother.