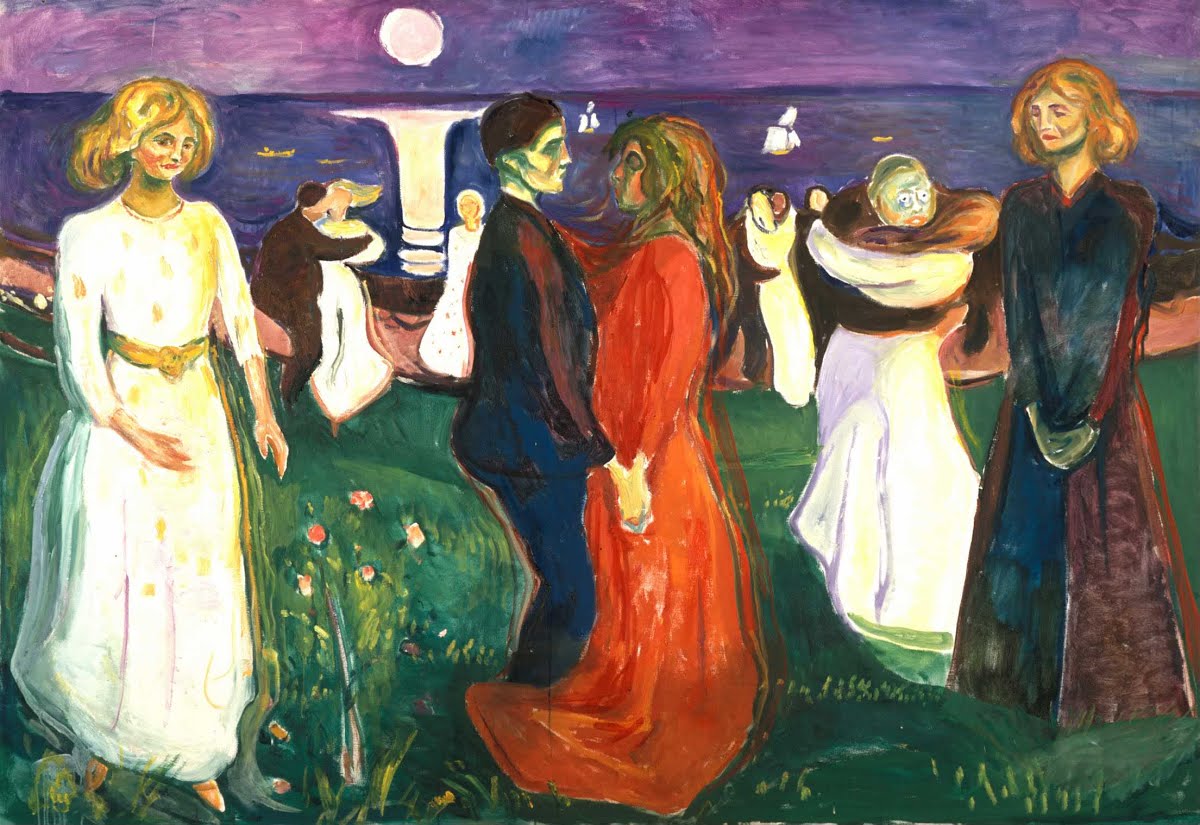 Join the dance of life

With conscientiousness, introspective vigilance, self-restraint, and a sense of dignity, bring your own mind under control.

See the 𝗲𝗾𝘂𝗮𝗹𝗶𝘁𝘆 (non-duality) of praise and blame, approval and disapproval, good and bad reputation...

(i.e. 𝗡𝗼𝗻-𝗱𝘂𝗮𝗹𝗶𝘁𝘆 / 𝗨𝗻𝗶𝗼𝗻 𝗼𝗳 𝗼𝗽𝗽𝗼𝘀𝗶𝘁𝗲𝘀: Union of the Two truth about apparent opposites = They are empty of inherent existence (2nd truth) <==> because co-dependent with each other, and with the mind merely labelling / imputing / conceptualising them together (1st truth). Apparent opposites are inseparable, interdependent, co-defined, co-relative, co-dependent, co-emergent, co-evolving, co-ceasing / co-transcended, equal / non-dual / one -- in the non-dual sense of those terms: ex. not different / separate / multiple / dual, not identical / united / one / non-dual, not both together, not neither; etc. Meaning their true nature is beyond all extremes & middle, beyond all conceptual elaborations, beyond all conditioning / karma.)

For they are just like illusions or dreams and have no true existence (i.e. 𝗲𝗺𝗽𝘁𝘆 𝗼𝗳 𝗶𝗻𝗵𝗲𝗿𝗲𝗻𝘁 𝗲𝘅𝗶𝘀𝘁𝗲𝗻𝗰𝗲).

Learn to bear them patiently, as if they were mere echoes,

And sever at its root the mind that clings to an ‘I’ or a self.

With few wants, be content with what you have,

And with gratitude repay any kindness you receive.

As no ordinary being can truly take the measure of another, do not disparage anyone at all.

They will gain results accordingly. (i.e. laws of karma)

You might have a hundred or a thousand teachers,

But the one who introduces you to 𝗺𝗶𝗻𝗱'𝘀 𝗻𝗮𝘁𝘂𝗿𝗲 (Ground) is supreme,

Superior in kindness equal to the Buddha which is both inseparable and is the very essence of your own mind,

Is entirely beyond arising, ceasing and remaining

This is what followers of our tradition,

Call 𝗿𝗶𝗴𝗽𝗮, 𝗽𝘂𝗿𝗲 𝗮𝗻𝗱 𝗼𝗽𝗲𝗻 𝗮𝘄𝗮𝗿𝗲𝗻𝗲𝘀𝘀. (i.e. the self-arisen unchanging eternal timeless spaceless limitless pristine Ground -- not many, no tone, not both together, not neither)

The essence of this approach is none other than 𝘁𝗮𝗸𝗶𝗻𝗴 𝗮𝘄𝗮𝗿𝗲𝗻𝗲𝘀𝘀 𝗮𝘀 𝘁𝗵𝗲 𝗽𝗮𝘁𝗵, (i.e. directly abiding in the Ground)

(i.e. Liberation / enlightenment is spontaneously directly perceiving / realising / abiding in the inconceivable true nature & dynamic of Reality as it is here & now, of our own true nature, of Suchness / Thusness / Ground / Buddha-nature / Genuine-emptiness / Primordial awareness ... It is like self-illumination / self-liberation / self-awakening. The Ground directly recognises itself through us.)

Means that in stillness, which is beyond arising,

There is movement, which is beyond cessation —

Stillness and movement, arising and ceasing, are thus inseparable.

Undistracted awareness is the path of the Victorious,

And distraction is the playground of saṃsāra.

(i.e. 𝗡𝗼𝗻-𝗱𝘂𝗮𝗹𝗶𝘁𝘆 / 𝗨𝗻𝗶𝗼𝗻 𝗼𝗳 𝗼𝗽𝗽𝗼𝘀𝗶𝘁𝗲𝘀 like 𝙨𝙩𝙞𝙡𝙡𝙣𝙚𝙨𝙨 & 𝙢𝙤𝙫𝙚𝙢𝙚𝙣𝙩, Ground & display, samsara & nirvana: Union of the Two truth about apparent opposites = They are empty of inherent existence (2nd truth) <==> because co-dependent with each other, and with the mind merely labelling / imputing / conceptualising them together (1st truth). Apparent opposites are inseparable, interdependent, co-defined, co-relative, co-dependent, co-emergent, co-evolving, co-ceasing / co-transcended, equal / non-dual / one -- in the non-dual sense of those terms: ex. not different / separate / multiple / dual, not identical / united / one / non-dual, not both together, not neither; etc. Meaning their true nature is beyond all extremes & middle, beyond all conceptual elaborations, beyond all conditioning / karma.)

Continuously, both day and night.

The nature of mind is clear light.

Sullying thoughts are to be purified.

(i.e. 𝗧𝗵𝗲 𝗠𝗶𝗱𝗱𝗹𝗲 𝗪𝗮𝘆 𝗳𝗿𝗲𝗲 𝗳𝗿𝗼𝗺 𝗮𝗹𝗹 𝗲𝘅𝘁𝗿𝗲𝗺𝗲𝘀 & 𝗺𝗶𝗱𝗱𝗹𝗲:
nothing to accept /affirm / seek / do / add in absolute terms,
nothing to reject / negate / abandon / not-do / subtract in absolute terms,
just conventionally / relatively / inter-subjectively if it helps someone to get closer to the inconceivable liberating Truth.)

The stirrings of mind must naturally free themselves. (i.e. self-liberation though direct wisdom)

The source of virtuous action

There is no limit to what could be said,

But now is the time for essential practice,

So may this short explanation

Cause experience and realization to increase just like the full moon in a cloudless sky.

(i.e. If you listen carefully here & now, every sight, touch or sound is teaching you the true nature of Reality as it is here & now. They are compassionate manifestations of the Buddha / ground. It all depends on your mindfulness / awareness here & now.)

Look into the awakened mind of your own awareness!

It has neither form nor color, neither center nor edge.

At first, it has no origin but is empty.

Next, it has no dwelling place but is empty.

At the end, it has no destination but is empty. (i.e. no real origination, duration, cessation)

This emptiness is not made of anything and is clear and cognizant. (i.e Union of the Two Truth: Union relative functionality / cognizance <==> and emptiness of inherent existence)

When you see this and recognize it, you know 𝘆𝗼𝘂𝗿 𝗻𝗮𝘁𝘂𝗿𝗮𝗹 𝗳𝗮𝗰𝗲.

You have then seen the nature of mind,

resolved the basic state of reality and cut through doubts about topics of knowledge.

from the book "Advice from the Lotus-Born"

Look into the mirror of your mind ~ Naropa

Naropa, you should strive

For Samsara and Nirvana's unity.

Look into the mirror of your mind (Ground), which is delight eternal,

The mysterious home of the Dakini.

from the book "The Life and Teaching of Naropa"

The Divine Feminine: The Essence of All

In our tradition, we accept that all things come from this beautiful place of sacred vacancy - 𝘁𝗵𝗲 𝗽𝘂𝗿𝗲 𝗽𝗼𝘁𝗲𝗻𝘁𝗶𝗮𝗹 𝗼𝗳 𝗮𝘄𝗮𝗿𝗲𝗻𝗲𝘀𝘀

symbolically immortalized in Tantric texts as the Mother's womb - the birthplace of unlimited possibility.

Just like a Mother giving birth - all appearances are expressions of the never-ending luminous and creative 𝗱𝗶𝘀𝗽𝗹𝗮𝘆 𝗼𝗳 𝗺𝗶𝗻𝗱 (𝗚𝗿𝗼𝘂𝗻𝗱).

In Sanskrit, the term is "gotra," it means the essential nature or seed from which all appearances of the world derive. The womb gives rise to all form (display / appearances), and this form is derived from an empty space - seeded with love and compassion (Sanskrit: bodhicitta).

Hence, the ultimate nature of all appearances in this world are the beautiful reflections of love and limitless potential which are represented as male and female energy (Sanskrit: Shiva and Shakti). When these two forces are brought together and realized in ecstatic non-dual union this is referred to as awakening and at its highest level - enlightenment.

Consequently, in Tantra nothing but the highest respect is given for the energetic potential of the divine feminine and the softness of  compassion.

"Like the Buddha, we too should look around us and be observant, because everything in the world is ready to teach us. With even a little intuitive wisdom we will be able to see clearly through the ways of the world. We will come to understand that 𝗲𝘃𝗲𝗿𝘆𝘁𝗵𝗶𝗻𝗴 𝗶𝗻 𝘁𝗵𝗲 𝘄𝗼𝗿𝗹𝗱 𝗶𝘀 𝗮 𝘁𝗲𝗮𝗰𝗵𝗲𝗿.. Trees and vines, for example, can all reveal the true nature of reality. With wisdom there is no need to question anyone, no need to study. We can learn from Nature enough to be enlightened, because everything follows the way of Truth. It does not diverge from Truth".

You are not alone (you are surrounded by Reality as it is here & now, the ultimate teacher) ~ Lama Zopa Rinpoche

"You are not alone because all the time there are numberless buddhas and bodhisattvas surrounding you, everywhere loving you, guiding you, that is what they do."

from the book "How to be happy"

Wherever you go you will find your teacher,

as long as you have the eyes to see and the ears to hear.

(you are surrounded by Reality as it is here & now, the ultimate teacher)

The experience of the tantric yogi is like this:

The outer world is seen as a sacred mandala circle,

And all living beings seen as divine beings.

And all of one's actions become spiritual,

Regardless of how they conventionally appear.

Every sound that one makes

from the book "The Second Dalai Lama: His Life And Teachings"