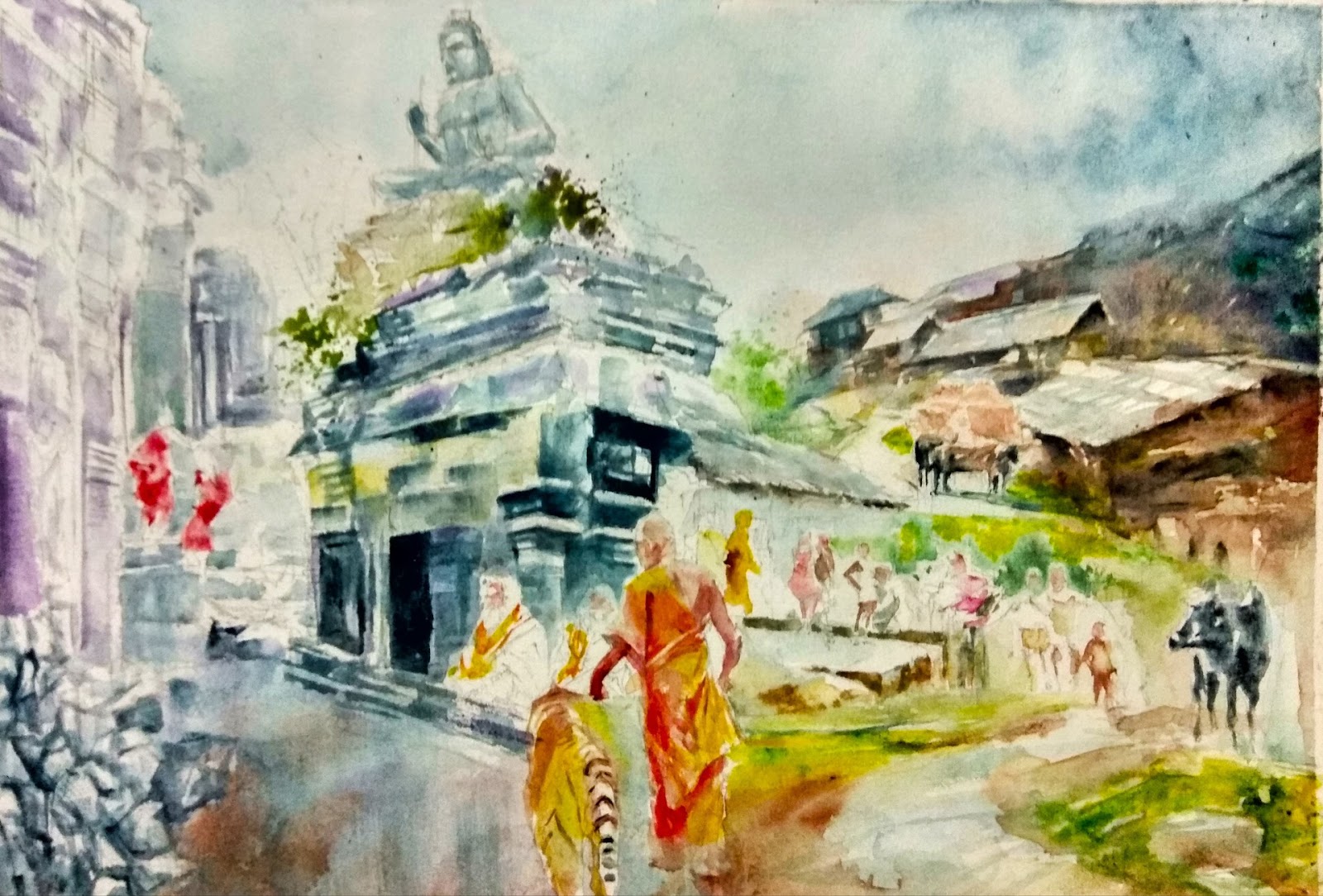 "This deluded samsara, the illusion of outer appearance,

I have realized to be unborn Mahamudra.

This mental consciousness, the inner grasping one,

Mind knows to be its own true nature."

From the book "The Karmapas and their Mahamudra forefathers"

More comments from another text:

In Reality, 𝗲𝘃𝗲𝗿𝘆𝘁𝗵𝗶𝗻𝗴 𝗶𝘀 𝘁𝗵𝗲 𝗶𝗻𝘀𝗲𝗽𝗮𝗿𝗮𝗯𝗹𝗲 𝗕𝘂𝗱𝗱𝗵𝗮, 𝗗𝗵𝗮𝗿𝗺𝗮, 𝗦𝗮𝗻𝗴𝗵𝗮; 𝘁𝗵𝗲 𝘁𝗿𝗶𝗸𝗮𝘆𝗮, 𝘁𝗵𝗲 𝗚𝗿𝗼𝘂𝗻𝗱, 𝗣𝗿𝗶𝗺𝗼𝗿𝗱𝗶𝗮𝗹 𝗮𝘄𝗮𝗿𝗲𝗻𝗲𝘀𝘀. Union Ground <==> displays / manifestations / appearances. Union of opposites. Union of the Two Truths. Not different / separate / multiple / dual, not identical / united / one / non-dual, not both together, not neither. But, some are self-aware of it, fully awake, and some are not aware of it, ignorant.

𝗘𝘃𝗲𝗿𝘆𝘁𝗵𝗶𝗻𝗴 𝗶𝘀 𝗽𝘂𝗿𝗶𝗳𝗶𝗲𝗱 / 𝘀𝗲𝗹𝗳-𝗹𝗶𝗯𝗲𝗿𝗮𝘁𝗲𝗱 / 𝘁𝗿𝗮𝗻𝘀𝗰𝗲𝗻𝗱𝗲𝗱 / 𝘁𝗿𝗮𝗻𝘀𝗺𝘂𝘁𝗲𝗱 -- 𝗯𝗲𝗰𝗼𝗺𝗲 𝗹𝘂𝗺𝗶𝗻𝗼𝘀𝗶𝘁𝘆 / 𝗰𝗹𝗲𝗮𝗿 𝗹𝗶𝗴𝗵𝘁 / pure body & speech & mind, pure subject & object & action -- 𝘄𝗶𝘁𝗵 𝘁𝗵𝗲 𝗱𝗶𝗿𝗲𝗰𝘁 𝘄𝗶𝘀𝗱𝗼𝗺 of being fully aware of their true nature & dynamic, as pointed by concepts like the Union of the Two Truths about the three spheres, the Union of opposites, the Middle Way free from all extremes & middle. It is like self-clarity, self-purification, self-illumination.

𝗡𝗶𝗿𝘃𝗮𝗻𝗮 𝗶𝘀 𝘀𝗮𝗺𝘀𝗮𝗿𝗮 𝗽𝘂𝗿𝗶𝗳𝗶𝗲𝗱 𝘄𝗶𝘁𝗵 𝗱𝗶𝗿𝗲𝗰𝘁 𝘄𝗶𝘀𝗱𝗼𝗺: The purification / self-liberation / transcendence / transmutation of all appearances, of all conditioning / karma, of the whole samsara, through the direct wisdom of awareness of the true nature & dynamic of the Ground / Reality as it is here & now, as pointed by concepts like: the Union of the Two Truths [U2T], the Union of the three spheres [U3S], the Union of opposites [Uopp], the tetralemma, the Middle Way free from all extremes & middle, free from all conceptual proliferations -- nothing to accept / affirm / seek / do / add in absolute terms, nothing to reject / negate / abandon / not-do / subtract in absolute terms, just conventionally / relatively / inter-subjectively if it helps someone to get closer to the liberating Truth --, the ‘equality / purity / perfection / divinity / spontaneity / inalterability / identity / unity / oneness / non-duality’ of everything here & now. Nirvana is being able to live in the ordinary world, motivated by bodhicitta, helping others, using conventional relative tools / fabrications / truths / methods / goals / concepts / dualities, without being fooled by their illusory nature, without grasping at them, without getting attached to them, without becoming slaves to them. Using them while being fully aware of the true & dynamic nature of the three spheres -- subject / actor, relation / action, object / result --.

𝗠𝗮𝗵𝗮𝗺𝘂𝗱𝗿𝗮: the fact that "all phenomena inevitably are stamped by the fact of wisdom and emptiness inseparable [U2T]" -- Mahamudra is defined by Gampopa as "the realization of the natural state as awareness-emptiness [U2T], absolutely clear and transparent, without root". -- Gampopa also states that mahamudra is "the paramita of wisdom, beyond thought and expression (inconceivable)." = Meaning Mahamudra is the inconceivable Union of the Two Truths [U2T] free from all extremes & middle; Union of dependent origination / relative functionality / clarity / luminosity / cognizance of Mind <==> and its emptiness of inherent existence.

Primordially pure, the expanse of all phenomena is great bliss.

All signs of elaboration stilled, it is spontaneously present.

In that glad realm, where the joyous ambrosia of the three vehicles is found.

May the sun of naturally arising awareness be victorious.

from the book "Music In The Sky: The Life, Art, And Teachings Of The 17Th Karmapa Ogyen Trinley Dorje"

Never noticing that they flowed naturally the rest of the day..."

The nature of mind is simply the mind itself left in an unaltered state.

If you wish to abandon them,

Since they are unborn,

they should not be rejected.

Milarepa’s Song of the Three Nails

All conceptual thoughts are free in being dharmakāya,

The luminous clarity of the Awareness [of one’s dharmakāya nature] is the condition of bliss,

Thus, settle and rest naturally in this uncontrived state.

"Naropa, you should strive

For Samsara and Nirvana's unity.

Look into the mirror of your mind, which is delight eternal,

The mysterious home of the Dakini."

All is neither false nor true,

Like the moon’s reflection in water, say the wise.

The ordinary mind is none other than

The dharmadhātu, the buddha nature (it is also the Ground).

From Karmapa Rangjung Dorje, The Treatise Called "Revealing the Essence of the Tathāgatas"

Via: Naturally Liberating Whatever You Meet

A Concise Instruction for Realizing the Nature of Mind