Integrating the Personal and the Transpersonal - 080 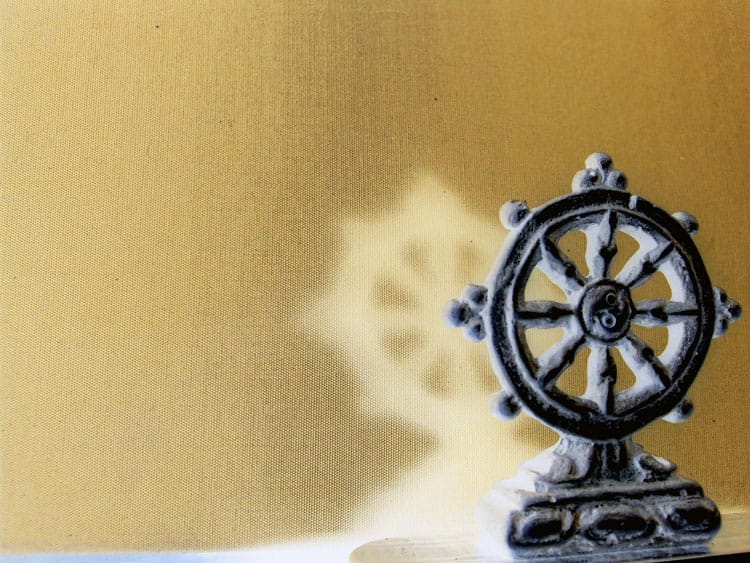 Integrating the Personal (relative) and the Transpersonal (ultimate reality)

(Résumé: In Dzogchen one considers, right from the start, the Union of the Two Truths free from all extremes & middle: Union relative reality <==> ultimate reality; Union of conventionally dependently co-arisen relatively functional impermanent appearances (1st truth) <==> and emptiness of inherent existence (2nd truth). Everything is appearing but empty, empty but still appearing. One aspect / truth implies the other (<==>). Also: The two truths themselves are like a Union of being empty of inherent existence (2nd truth) <==> because/then conventionally dependently co-arisen (co-dependent) relatively functional impermanent appearances / tools / antidotes. That is the Union of the Two Truths about the two truths themselves. So, in the end, there is nothing to grasp as the absolute: not the first truth alone / relative reality / causality / karma (the extreme of realism), not the 2nd truth alone / ultimate reality / emptiness (the extreme of nihilism), not both truths together (a form of dualism / opposition between the two levels of reality), not neither truths (a form of holism / monism / radical oneness). Everything is not existent, not non-existent, not both together, not neither; not different / separate / multiple / dual, not identical / united / one / non-dual, not both together, not neither; etc. Meaning the true nature of Reality is beyond all conceptual proliferations, beyond all extremes & middle, beyond all dualities, beyond all conditioning / karma. It cannot be described, it has to be directly perceived / realised.)

“Although people desire the non-dualistic and limitless (awareness, they make a) limit out of that which is not limited and thereby constrict the essential mind itself. Even though people desire (the realization of) both (the transcendent and relative) realities they fall into an extreme understanding of these. Although they desire the union of the two realities this is not the way things naturally are. No matter in what way you think about this you are trapped in the cage of (conflicting) desires.”
-- Longchenpa

Throughout the ages spiritual masters and sage philosophers have pointed to a limitless, transcendent mystical reality by contrasting this with the limited, deceptive, and impermanent reality that we experience through our senses. Amongst other names, this mystical reality has been called the Godhead, Brahman, Tao, Source and Emptiness. However, according to the Dzogchen or Complete Fulfillment tradition, these realities are limited to the very same extent that they are distinguished from that which is limited. In other words, as soon as limitlessness displaces that which is limited it assumes its own limits and restrictions.

In the above lines, the famous fourteenth century Tibetan master, Longchenpa, cautions people against limiting themselves by becoming fixated on the limitlessness of the mind itself. By distinguishing the nature of the mind itself as being fundamentally different from mental phenomena, such as thoughts and feelings, people can become intellectually and philosophically captivated by the “idea” that the mind is limitless. But in so doing they fall into a fixed and extreme understanding of the Complete Fulfillment perspective.

The Chinese Zen master Foyan makes the same point about Zen when he writes that,

This type of fixation is based on making a distinction between appearance and Reality.

In orthodox Buddhism and mystical philosophies such as Hindu Advaita Vedanta, this distinction has been formalized in a theory of two levels of reality, the social or relative and the transcendent level.

Thus, whilst the theory of two distinct levels of reality is designed to assist practitioners’ spiritual evolution, from a practical angle it can be misused so that it gives license and support to the innate human impulses to:

The brilliance of the Complete Fulfillment tradition [Dzogchen], is that

“The state of spaciousness, the true nature of being, is without boundaries and is non-dual. It does not come into being and cannot be destroyed. It neither endures nor decays, and neither comes nor goes. Within this space the entire variety of phenomena appear distinctly (1st truth) yet when they manifest they are naturally devoid of complexity (2nd truth).”

When we begin to relate to our experience as a disclosive space, we see that it is the very nature of what we are experiencing. That which is disclosed by the forms (1st truth) of our experience is the disclosive space itself (2nd truth). In fact, outside of what is disclosed there is no disclosive space. Similarly, the very structure of our personality (1st truth) reveals the transpersonal nature of being itself (2nd truth). When we begin to experience the world as this disclosive space, the modulations of our thoughts and emotions, and changes in our physical environment become balanced and harmonized. Our experience becomes simple and uncomplicated yet without compromising the full richness of its texture and distinctiveness. The Complete Fulfillment tradition [Dzogchen] invites us to appreciate that we are a totally unconditioned locus of experience, without making this in any way special. There is absolutely no effort, struggle, or need to escape who we are, since this is our unique expression of transcendence. We open out so that we can experience the subtle and dramatic modulations of our thoughts, moods, feelings and perceptions, all the while realizing that they are just a free play of appearances. Instead of arming ourselves with a battery of techniques for running away from unpleasant experiences and enhancing those that we approve of, we come to see that every aspect and dimension of our experience is an exquisite expression of freedom and transcendence. In this way, the Complete Fulfillment closes the traditional rift between physical embodiment and spiritual transcendence.

Adapted from a commentary Peter is preparing a text titled The Natural Freedom of Being by the great Dzogchen master, Longchenpa.