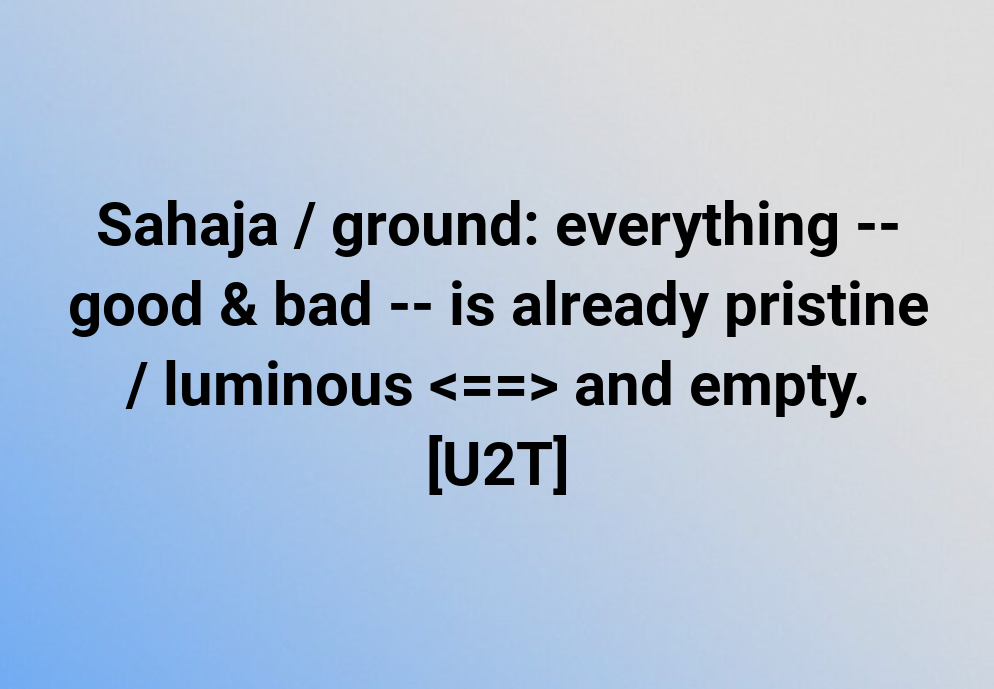 This 'conceptual mind' is sahaja too.
"Accepting this while rejecting that, one only blocks the view."

"conceptual mind and naked awareness arise as a co-emergent unity"

Our Buddha-nature, the Buddha-nature of everything, is not something different than / separate from our actual body, speech & mind, our actual physical, conceptual & mental fabrications, our actual 5 aggregates. Our Buddha-nature is beyond dualities like good & bad, self & other(s), subject & object, whole & part, cause & effect, casuality & spontaneity, one & many, identity & difference, inside & outside, body & speech & mind, movement & stillness, action & non-action, thinking & non-thinking, conceptualisation & non-conceptualisation, discrimination & non-discrimination, acceptation & rejection, duality & non-duality, ...

It is just a matter of directly realising that, this One perfection.

Visit of the The mahasiddha:

"... This nature of mind… what is it they wonder? What does he mean? Sahaja is the word he uses most, sahaja the innate, 𝘀𝗮𝗵𝗮𝗷𝗮 𝘁𝗵𝗲 𝗰𝗼𝗲𝗺𝗲𝗿𝗴𝗲𝗻𝘁 𝘂𝗻𝗶𝘁𝘆 𝗼𝗳 𝗲𝗺𝗽𝘁𝗶𝗻𝗲𝘀𝘀 𝗮𝗻𝗱 𝗹𝘂𝗺𝗶𝗻𝗼𝘀𝗶𝘁𝘆 [i.e. the Ground / Union of the Two truths - U2T]. Few have any idea what he is talking about, but they listen intently. ..."

"Beginning" and "end" (dualities like origination & cessation of appearances) are dependent upon conceptualization.

(i.e. Objects / phenomena are co-dependent on the subject / mind, merely labelled / imputed by the subject / mind; thus empty of inherent existence. Thus they have no real three stages of becoming: origination / beginning / coming, duration / middle / staying, cessation / ending / going. Thus there is nothing to accept nothing to reject in absolute terms. They cannot be accepted or rejected / abandoned.)

(i.e. The subject / mind is itself co-dependent with the objects / phenomena; thus also empty of inherent existence. Thus it has no real three stages of becoming: origination / beginning / coming / birth, duration / middle / staying / life, cessation / ending / going / death. Thus there is nothing to accept nothing to reject in absolute terms. It cannot be accepted or rejected.)

That (ignorance of their true nature & dynamic, and the consequential grasping, clinging ...) cause karma and kleshas to arise.

The (karma and kleshas) manifest the skandhas (5 aggregates; body, speech & mind), dhatus, ayatanas, and all the phenomena of dualistic appearances (displays).

(i.e. Liberation if not gained by accepting this and/or rejecting that since they are all empty of inherent existence; but by directly realising their true nature & dynamic. Then they self-liberate, are purified, are transmuted into the inseparable pure body, speech & mind of a Buddha, the inseparable three kayas. The whole samsara, karmic cycle, is transmuted into Nirvana here & now.)

Isn't this belief in duality a fraud? (ex. dualities like: origination and cessation of appearances; good & bad; acceptation / affirmation / seeking and rejection / negation / abandonment of appearances)

[Teaching duality or non-duality depending on the case:]

Though this (non-duality) understanding is taught as a remedy,

It is not conception of non-conceptuality.

But it is taught so that attachment to things as real will cease.

There isn't anything that is either real or false.

(i.e. There is no inherent / universal / absolute truth, method, goal ... valid for all situations / cases.)

The wise have said that everything is like the moon's reflection on water.

(i.e. Everything is like a Union of being conventionally dependently co-arisen relatively functional impermanent appearances <==> empty of inherent existence. = Union of the Two Truths = the Ground.)

(Everything, good & bad, is the Ground / dharmadhatu / Buddha-nature / genuine Emptiness / Union of the Two Truths. So, there is nothing to accept nothing to reject in absolute terms. In that sense, everything is said to be already equal, pure, perfect, divine here & now.)

(i.e. This Ground, the Union of the Two Truths, is said to be inconceivable, self-arisen, pristine, unchanging, unperturbable, unalterable, permanent; functional but empty, empty but still functional / luminous / cognizant. One aspect / truth implies the other (<==>).)

It is described by many names,

But its meaning cannot be known through verbal expression."

The root of all suffering is 'ignorance of their true nature & dynamic', grasping them because of ignorance.

It is like the ox-herding pictures: finally you return to the world, with a big belly and with the ox behind you. That picture, returning to the world, is the final point.

from the book The Teacup & the Skullcup: Chogyam Trungpa on Zen and Tantra 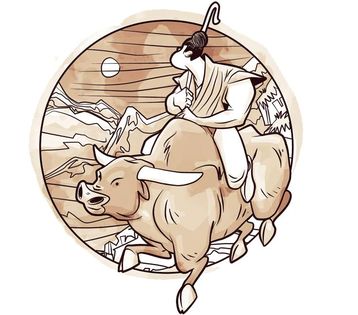 Perceiving everything in its natural purity ~ Dilgo Khyentse Rinpoche

All appearances are understood as being dharmakaya. We perceive everything in its natural purity, and there is nothing we can call impure.

from the book Zurchungpa's Testament

(i.e. No need to clear away thoughts, concepts, dualities ... to get to the ultimate mind; they are also part of the ultimate mind / Ground / U2T. All we need to do is directly observe them here & now (in meditation: Union samatha & vipashyana) in order to directly perceive their true nature & dynamic: the Union of the Two Truths about them, the Union of the Ground and its displays.

The difference between ultimate mind and normal mind is being fully aware or not of the true nature & dynamic of whatever appears. That is what 'purifies' samsara into Nirvana here & now.)

from the Collected Tantras of The Old Tradition originally translated by Vimalamitra and Nyag Jnanakumara, in Sanskrit Bodhicitta Sopashika.

At that time of recognition, since the past and the present are inseparable, the innate phenomenon of attachment is naturally pure;

therefore, anger, and so forth, are [also) pure.

Since there is no concept of attachment, not even the term anger, and so forth, exist; they are phenomena that arise from mind essence. Pure by their very nature, they cannot be differentiated. Firm and unchanging, they cannot be named and cannot be severed. They are in indissoluble union; 𝘁𝗵𝗲𝘆 𝗮𝗿𝗲 𝘁𝗿𝗮𝗻𝘀𝗳𝗼𝗿𝗺𝗮𝘁𝗶𝗼𝗻𝘀 𝗼𝗳 𝘁𝗵𝗲 𝗶𝗻𝗱𝗲𝘀𝘁𝗿𝘂𝗰𝘁𝗶𝗯𝗹𝗲 [𝘃𝗮𝗷𝗿𝗮] 𝗻𝗮𝘁𝘂𝗿𝗲.

From the absolute sameness of phenomena that is indivisible, infinite mandalas of phenomena arise from the essence of one's own mind, and male and female buddhas of (all] the families and of the five families [in particular), together with the bodhisattvas as the perfect retinue, arise and are perceived. The power of the interdependence of causes and conditions  is the primordial state that manifests all.

(Ordinary] body, voice, and mind are inseparable and have the nature of sameness.

Through the power of the essence that is devoid of intention, all the mandalas of Body, Voice, and Mind have always arisen and are still arising in their entirety from one's self. [All the manifestations of) light, of clairvoyance, (of the miraculous powers of] moving unobstructed through rocks, on water, and in the sky; of the various emanations, of different sounds and voices; and of all the existent and nonexistent phenomena found in the infinite, limitless universe of the three thousand world arise from the power of my Body, Voice, and Mind.

Therefore, through the discerning wisdom [one realizes that) all phenomena of cyclic existence as long as beings exist; (all) the perfect Enlightened Ones; everything that abides in the past, present, and future; the three existences; the three realms; the three Supreme (Jewels of Buddha, Dharma, and Sangha); all who abide in the mother's womb and (all) who have left (the womb]; the male, female, and neuter genders; animals, anguished spirits, hell beings, devas, (and) human beings; the old, the young, and so forth, are just me. Therefore, 𝘁𝗵𝗲𝘆 𝗮𝗿𝗲 𝘁𝗵𝗲 𝗲𝘀𝘀𝗲𝗻𝗰𝗲 𝗼𝗳 𝗺𝘆 𝗠𝗶𝗻𝗱.

Wherever I abide, I am the perfect and fully enlightened Buddha. Even when the bad times that are my transformation (come), I am the Buddha.

state. Not even one thing exists that (my primordial state) cannot transform into or become.

Translated from the Tibetan by Elio Guarisco, Adriano Clemente, and Jim Valby with the precious help of Chogyal Namkhai Norbu.

The preceding section is included only in The Marvelous Primordial State, The Mejing Tantra, a Dzogchen Semde Text, chapter 5, identified as M3, and found in the Collected Tantras of the Old Tradition, volume 6.

You realize that in the absolute there is nothing to be meditated on, yet still you practise meditation.

You see the relative and absolute as one, yet still you diligently practise.

Peerless teacher, at your feet I bow.

from the book "Words of My Perfect Teacher"

(i.e. It is not because the true nature of everything is non-dual, that we should grasp at this 'non-duality / oneness' and think that whatever we do good or bad is the same. Emptiness (2nd truth) doesn't contradict / deny the relative truths / causality / the laws of karma. They support each other. Unwholesome actions continue to lead to suffering.

Everything -- good or bad -- is the self-arisen unalterable eternal Ground with its three inseparable qualities: 1) nature: dependently co-arisen relatively functional impermanent appearances, 2) essence: emptiness of inherent existence, 3) dynamism / compassionate energy: the Union of the two first aspect. Karma is still functional as long as we are still stuck in samsara because of our ignorance. With wisdom, it is automatic we would never do anything to harm others.)