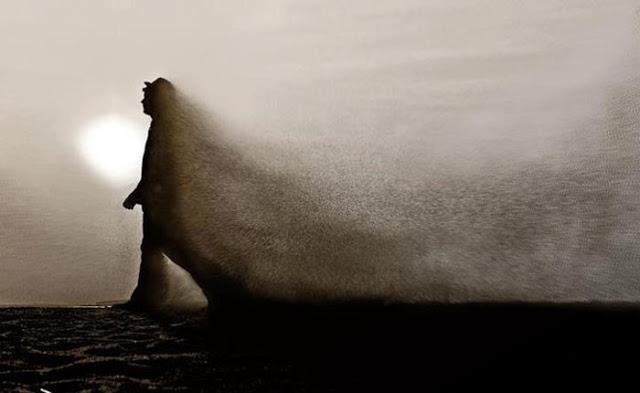 Do not cling to the past!
Do not reify the present and get attached to it!
Do not get obsessed by the future!

Résumé: Clinging definitively stops by itself as we gradually understand and realise the true nature of everything as pointed by concepts like: the Union of the Two Truths about the three spheres -- subject, relation / action, object --, the Union of opposites, the Middle Way, the tetralemma. Then, through this direct wisdom, samsara is transmuted into nirvana here & now.

Meanwhile, the less we cling / grasp / reify / fixate, the less we suffer because of our illusions -- wrong views and bad habits based on them. The more we act in accord with the true nature of reality, the more the feedback is positive.

So it is not about rejecting / negating / abandoning / not-doing / not-perceiving something or another, but about finally realising the true nature of Reality and acting more and more in accord with it.

To cut through the mind’s clinging, it is important to understand that all appearances are void, like the appearance of water in a mirage. Beautiful forms are of no benefit to the mind, nor can ugly forms harm it in any way. Sever the ties of hope and fear, attraction and repulsion, and remain in equanimity in the understanding that all phenomena are nothing more than projections of your own mind.

from the book The Heart Treasure of the Enlightened Ones

even to be attached to the idea of enlightenment

is to go astray.

Just let things be in their own way

and there will be neither coming nor going.

The degree of self-clinging (clinging to the ego) that we have is the measure of the harms we suffer.

from the book "An Introduction to Mahamudra Meditation"

Child, it is not by appearances that you are fettered but by craving.

Experiencing without getting involved ~ Ringu Tulku

A great meditator can experience everything and view all the impressions of the senses without getting involved and entangled, without making anything up. The point is how we deal with and react to appearances. ...

And Tilopa said to Naropa,

'My son, appearance does not bind you,

it's your grasping that binds you.'

(i.e. it is the reification, grasping, ignorance of their true nature ...)

from the book "Daring Steps: Traversing The Path Of The Buddha"

Unstained by any Grasping ~ Dudjom Rinpoche

Whatever perceptions arise, you should be like a little child going into a beautifully decorated temple; he looks, but grasping does not enter into his perception at all. You leave everything fresh, natural, vivid and unspoiled. When you leave each thing in its own state, then its shape doesn’t change, its color doesn’t fade and its glow does not disappear. Whatever appears is unstained by any grasping, so then all that you perceive arises as the naked wisdom of Rigpa, which is the indivisibility of luminosity and emptiness (Union of the Two Truths about Mind).

[Just do not cling to thoughts, concepts, feelings ...]

“I am not devaluing thoughts.

Just do not mix up what we think with what actually is.” 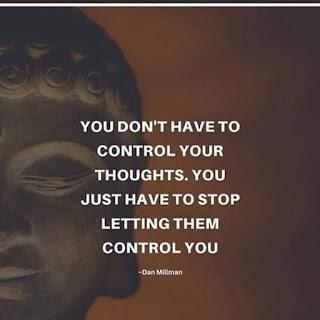 Thinking while resting in the natural state ~ Thrangu Rinpoche

Neither REJECT nor cling (ACCEPT) to words,

From Song of Precious Mirror Samadhi,

Mindfulness should guide all your actions and your spiritual endeavors.

Whatever you do, always apply three essential points:

1. undertake the action with the intention of doing so for the good of all beings;

2. execute it with perfect concentration, free of ATTACHMENT to concepts of subject, object, and action; and,

3. finally, dedicate the merit you have created to the enlightenment of all beings.

from the book The Hundred Verses of Advice: Tibetan Buddhist Teachings on What Matters Most

[Clinging at no view]

Non-self can be a view, impermanence might be a view, and if you are caught in a view (grasping it as if absolute), you are not really free. The ultimate has no [absolute] view. That is why nirvana is the extinction (transcendence) of all views, because views can bring unhappiness — even the views of nirvana, impermanence, and no-self — if we fight each other over these views.

(i.e. Even dependent origination (the 1st truth), or emptiness (the 2nd truth), or both together (Union of the Two Truths) might be a view. Like all other temporary imperfect adapted skillful means they might be very useful, for certain people at a certain stage, as pointers to the inconceivable true nature of Reality as it is here & now (object, subjects, relation / action), but if we grasp at them, thinking they are inherently existing, independent, absolute ... then they become poison. Totally rejecting them is also poison.

So they say emptiness is also empty.

And the Middle Way is freedom from all extremes & middle, from all conceptual elaborations, from all craving ...)

[Not even clinging at emptiness]

The relinquishing of all views ~ Nagarjuna

The victorious ones have said that emptiness is the relinquishing of all views.

For whomever emptiness is a view (clinging at emptiness as the absolute), that one will accomplish nothing.

from the book "The Fundamental Wisdom of the Middle Way: Nagarjuna's Mulamadhyamakakarika" 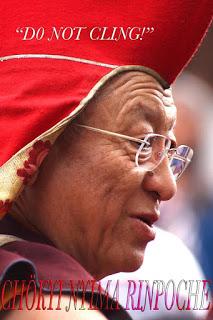 The truth you believe and cling to makes you unavailable to hear anything new.

From Discourse on the Absolute Truth -- Thich Nhat Hanh, Chanting From The Heart

This translation of the Discourse on the Absolute Truth has been prepared by Thich Nhat Hanh from the Paramatthaka Sutta Atthakavagga 5, Sutta Nipata. It appears in Thich Nhat Hanh, Chanting From The Heart (Parallax Press, Rev.Ed., 2006)

It is recited regularly at Plum Village practice centers around the world, as part of our daily sitting and chanting sessions.

He who still abides by a dogmatic view, considering it as the highest in the world, thinking “this is the most excellent” and disparaging other views as inferior, is still considered not to be fee from disputes.

When seeing, hearing, or sensing something and considering it as the only thing that can bring comfort and advantage to self, one is always inclined to get caught in it and rule out everything else as inferior.

Caught in one’s view and considering all other views as inferior—this attitude is considered by the wise as bondage, as the absence of freedom. A good practitioner is never too quick to believe what is seen, heard, and sensed, including rules and rites.

A good practitioner has no need to set up a new theory for the world, using the knowledge he has picked up or the rules and rites he is practicing. He does not consider himself as “superior”, “inferior”, or ‘equal” to anyone.

A good practitioner abandons the notion of self and the tendency to cling to views. He is free and does not depend on anything, even on knowledge. He does not take sides in controversies and does not hold on to any view or dogma.

He does not seek for anything or cling to anything, either this extreme or the other extreme, either in this world or in the other world. He has abandoned all views and no longer has the need to seek for comfort or refuge in any theory or ideology.

To the wise person, there are no longer any views concerning what is seen, heard, or sensed. How could one judge or have an opinion concerning such a pure being who has let go of all [absolute] views?

A wise person no longer feels the need to set up dogmas or to choose an ideology. All dogmas and ideologies have been abandoned (transcended) by such a person. A real noble one is never caught in rules or rites. He or she is advancing steadfastly to the shore of liberation and will never return to the realm of bondage. 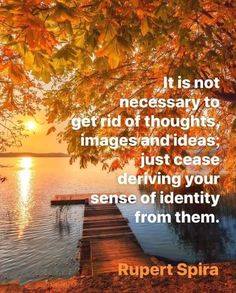 The problems we face with APPEARANCES (physical, mental, or conceptual: ex. concepts, dualities) and all of the suffering we experience as a result of appearances is not because of the appearances themselves but because of our FIXATION [or GRASPING] on them. It is our fixation upon appearances which turns appearances into enemies. Because these appearances are just appearances, they are just what appears to us; so if we have no fixation on them, they will not bring any suffering.

from the book "An Introduction to Mahamudra Meditation" 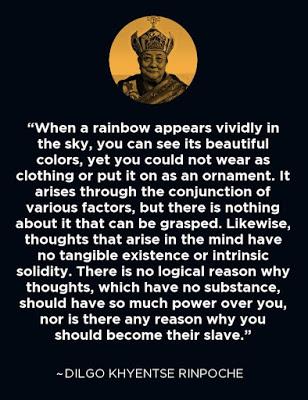 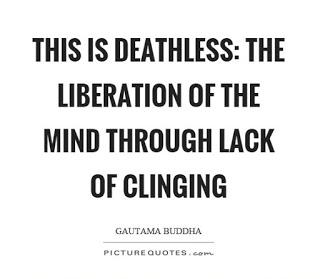 Having control over appearances does not mean jumping off buildings and flying. Rather, it means that 𝙮𝙤𝙪 𝙙𝙤 𝙣𝙤𝙩 𝙘𝙡𝙞𝙣𝙜 to appearances as they seem to be in the usual worldly way of relating to them. Such appearances will not cause you suffering or tie you up once you have gained mastery over them through not clinging.

It is prajna realizing selflessness that frees you from samsara. Through knowing 𝗮𝗽𝗽𝗲𝗮𝗿𝗮𝗻𝗰𝗲𝘀 𝘁𝗼 𝗯𝗲 𝗶𝗻𝘀𝗲𝗽𝗮𝗿𝗮𝗯𝗹𝗲 𝗳𝗿𝗼𝗺 𝗲𝗺𝗽𝘁𝗶𝗻𝗲𝘀𝘀, you have mastery over them. It is not necessary to engage in behavior that is contrary to a mundane way of seeing things.

Let it be ~ Ajahn Chah

Do not try to become anything.

Do not make yourself into anything.

Do not be a meditator.

Do not become enlightened.

When you sit, let it be.

What you walk, let it be.

It’s like a dance. And we have to give each being space to dance their dance. Everything is dancing; even the molecules inside the cells are dancing. But we make our lives so heavy. We have these incredibly heavy burdens we carry with us like rocks in a big rucksack. We think that carrying this big heavy rucksack is our security; we think it grounds us. We don’t realize the freedom, the lightness of just dropping it off, letting it go. That doesn’t mean giving up relationships; it doesn’t mean giving up one’s profession, or one’s family,or one’s home. It has nothing to do with that; it’s not an external change. It’s an internal change. It’s a change from holding on tightly to holding very lightly.

from the book "Into The Heart Of Life"
https://quotes.justdharma.com/its-like-a-dance-tenzin-palmo/

Since all virtuous thoughts and actions motivated by clinging to a concrete reality or to a self-cherishing attitude are like poisonous food, give them up. Learn not to cling, but to know the phantomlike nature of experience.

from the book "The Great Path of Awakening"